The number which some consider lucky, and the others unlucky, has proved to be destined for the island of Krk as a whole. It was inhabited by Croats in the seventh century and attacked by pirates seven times. The seventh prince to rule over Krk was Ivan from the Frankopan line, the last prince of Krk.

Today, the island of Krk consists of seven local authority units. One of them is the Municipality of Dobrinj, and its centre is also under the sign of this “destined” number. Legend has it that the previously nameless “white town in the middle of the island” got its name at the seventh attempt only. It was named precisely by those who left this place empty-handed in search of loot, but with a full heart and a conviction that “only good people live here, since they receive the enemy as one of their own”.

The geographic position of Dobrinj is described by a folk song, the unofficial anthem of Dobrinj: a white town in the middle of the island, which can only be reached by crossing a stream is a loose translation of the lyrics written in the dialect of Dobrinj. And when you enter Dobrinj by crossing the stream from whatever side of the island, you will step into the year 1100, when the written history of this region begins. That is the year in which the “birth certificate” of Dobrinj and Dobrinjština was drafted, the Deed of Gift of Dragoslav the Famous (Listina slavnog Dragoslava), although the history of this region began long before the written records. Those marks of history are omnipresent even today in the form of material heritage – from the old part of the town which has preserved its authentic, defensive form until today to the local square, Placa, surrounded by sycamore trees defying time.

There is also a park, “Jardin”, where the world-renowned writer Ivo Andrić used to walk. 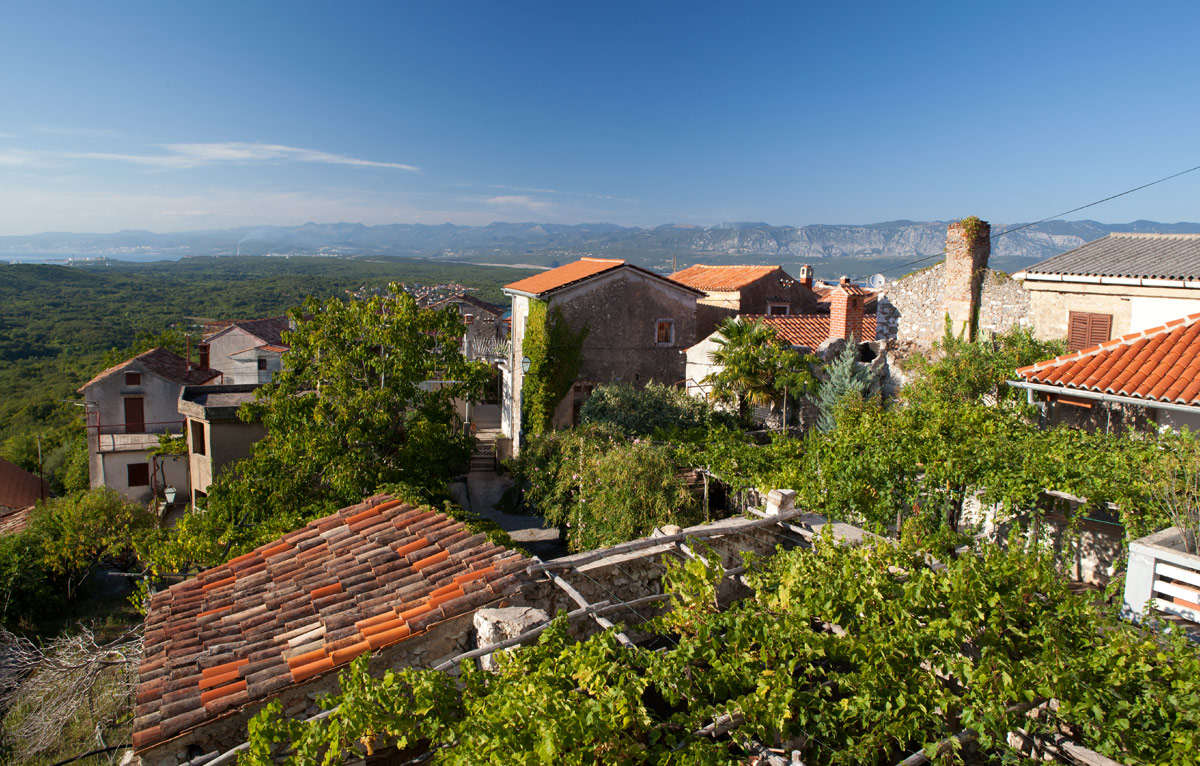 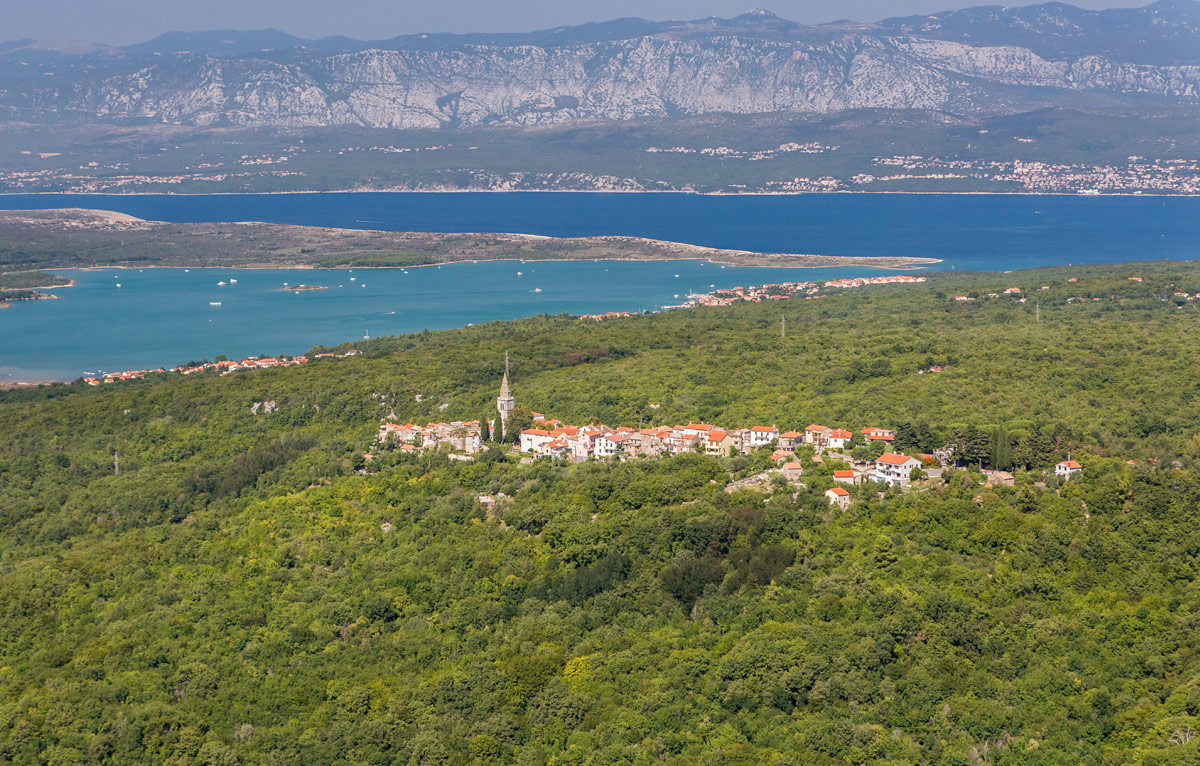 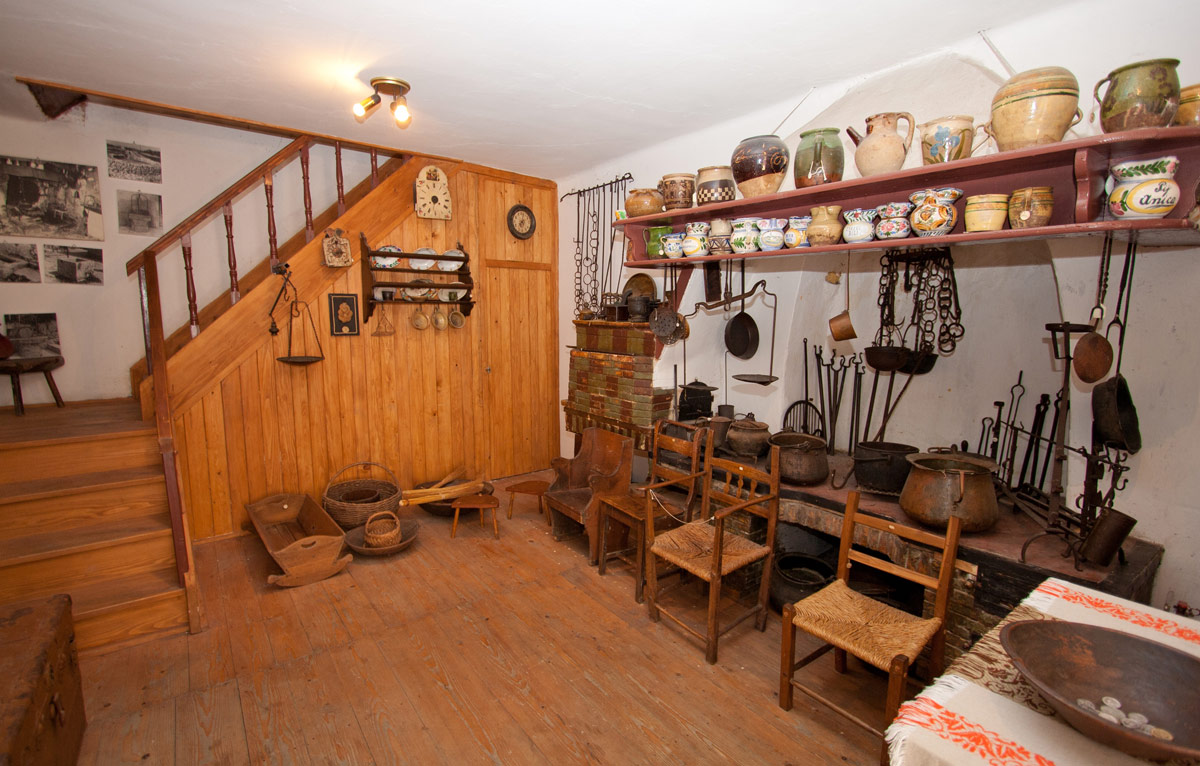 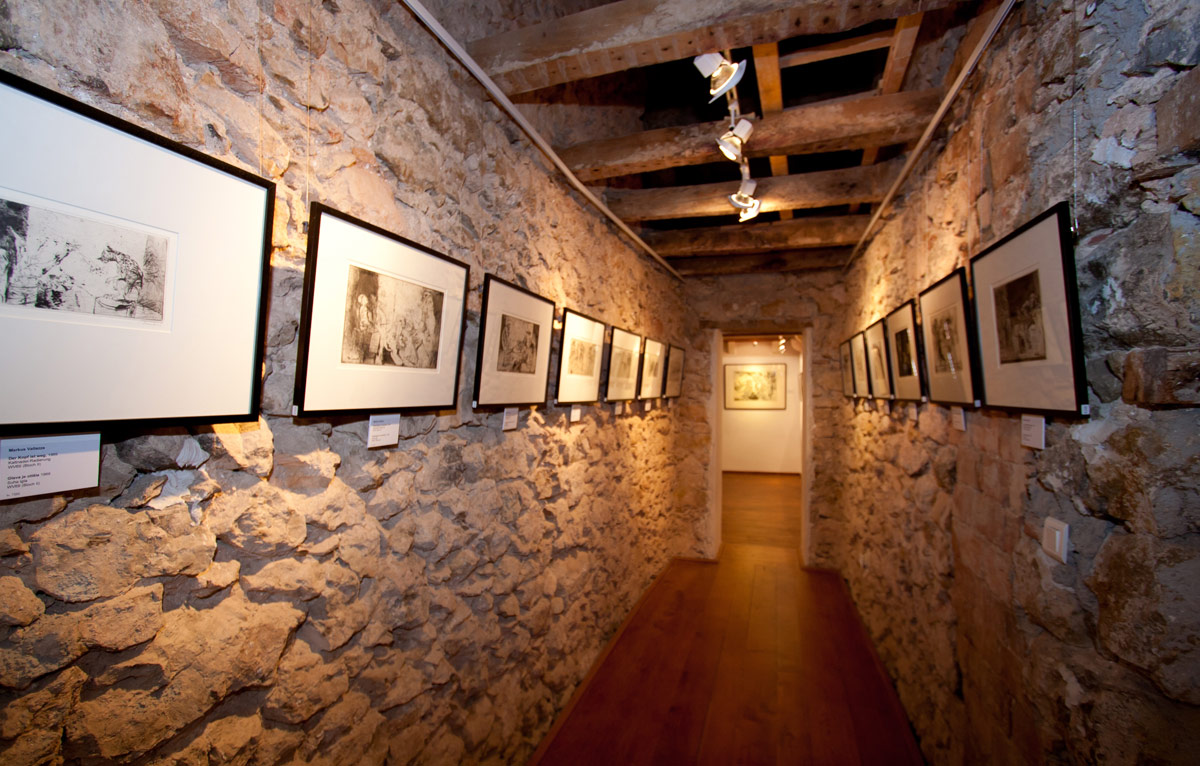 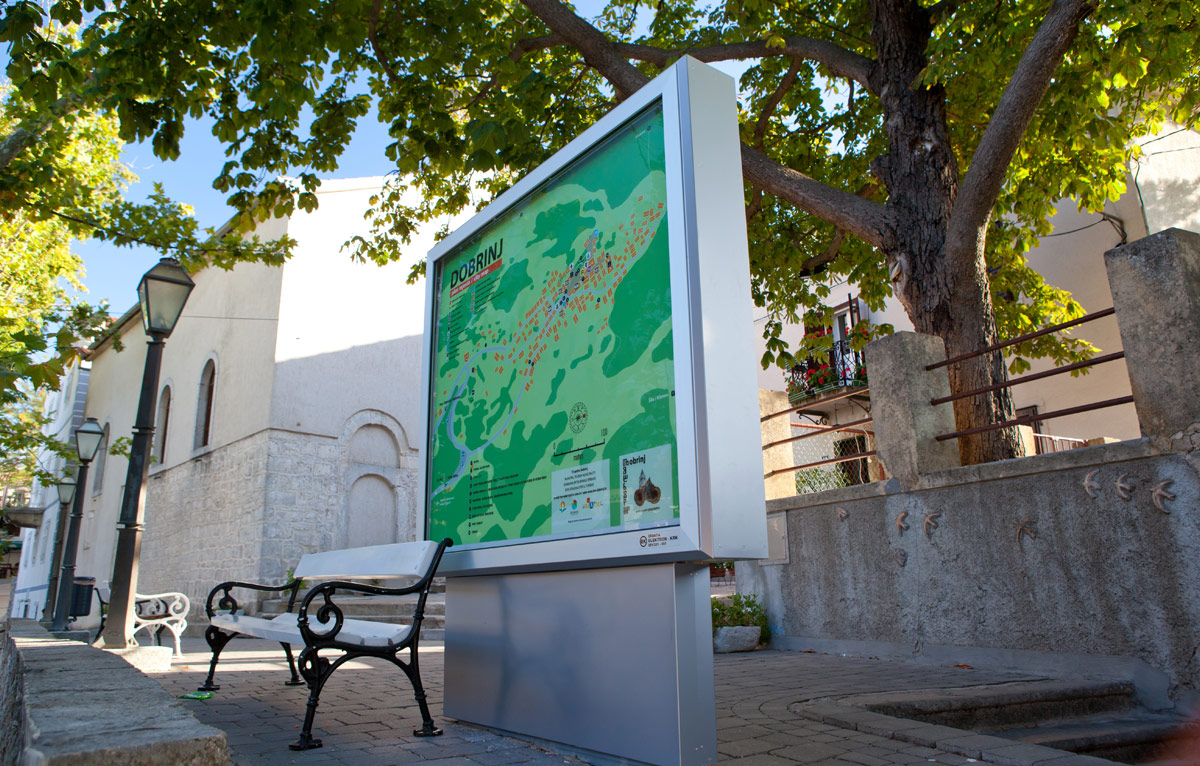 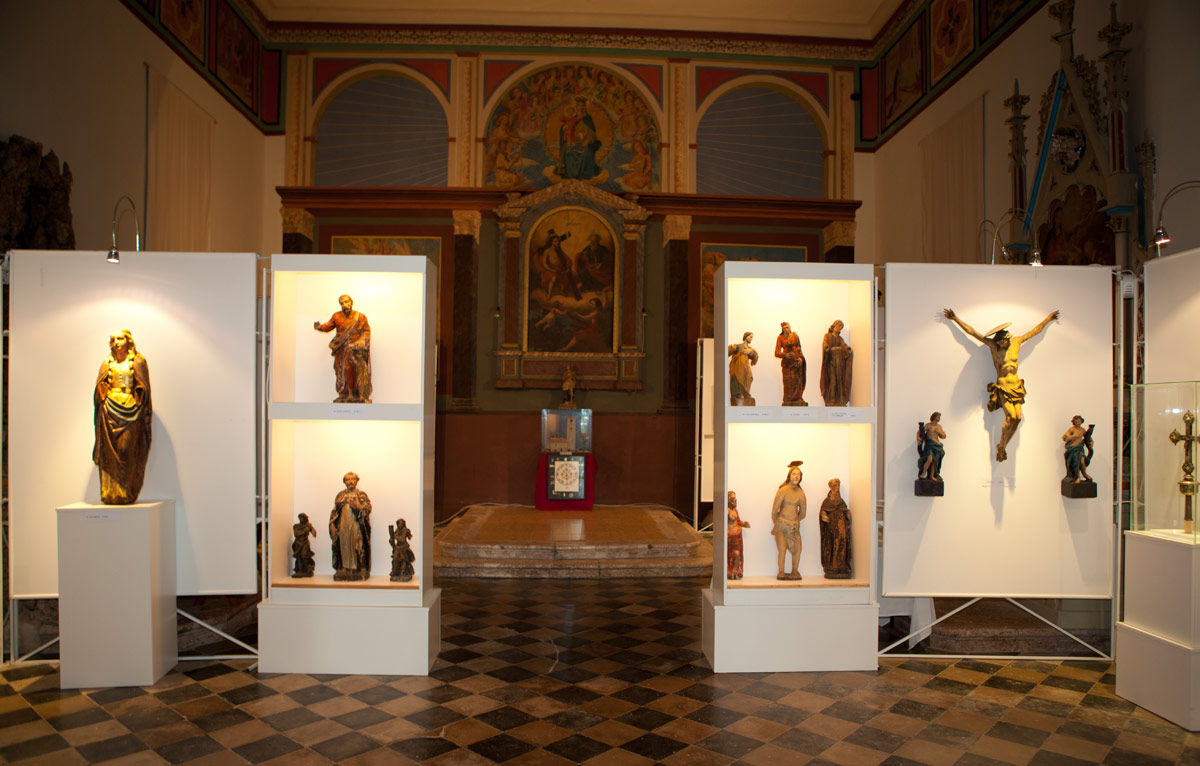 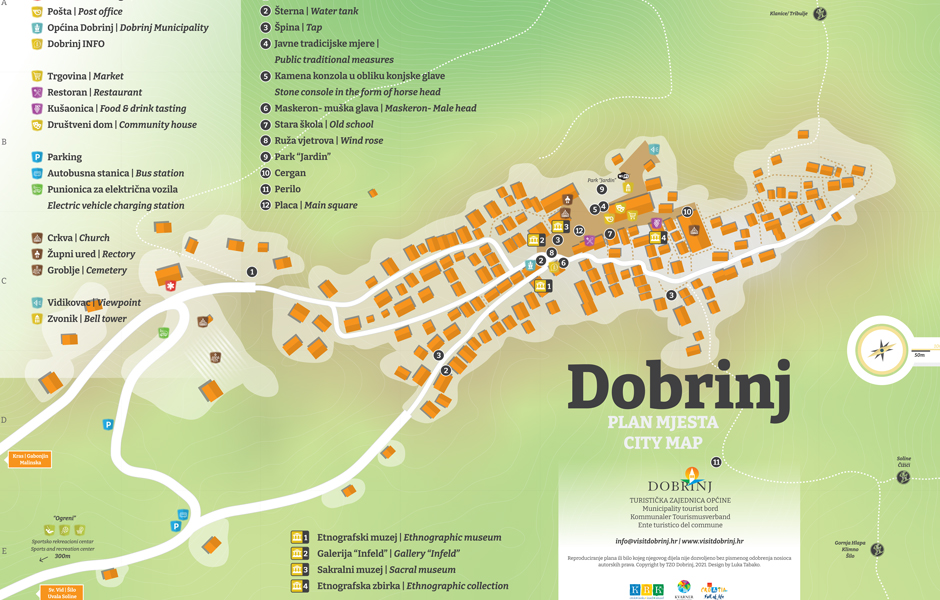 THE TOWN OF GOOD PEOPLE!

If you choose Dobrinj for your holiday destination, we guarantee you a true experience of everything we highlighted in the introduction – by visiting Dobrinj you are opening the door to the past. Authentic, ineradicable, living past! You do not need to revive it because it is still alive. It is up to you to experience it! Welcome to Dobrinj, the town of good people! 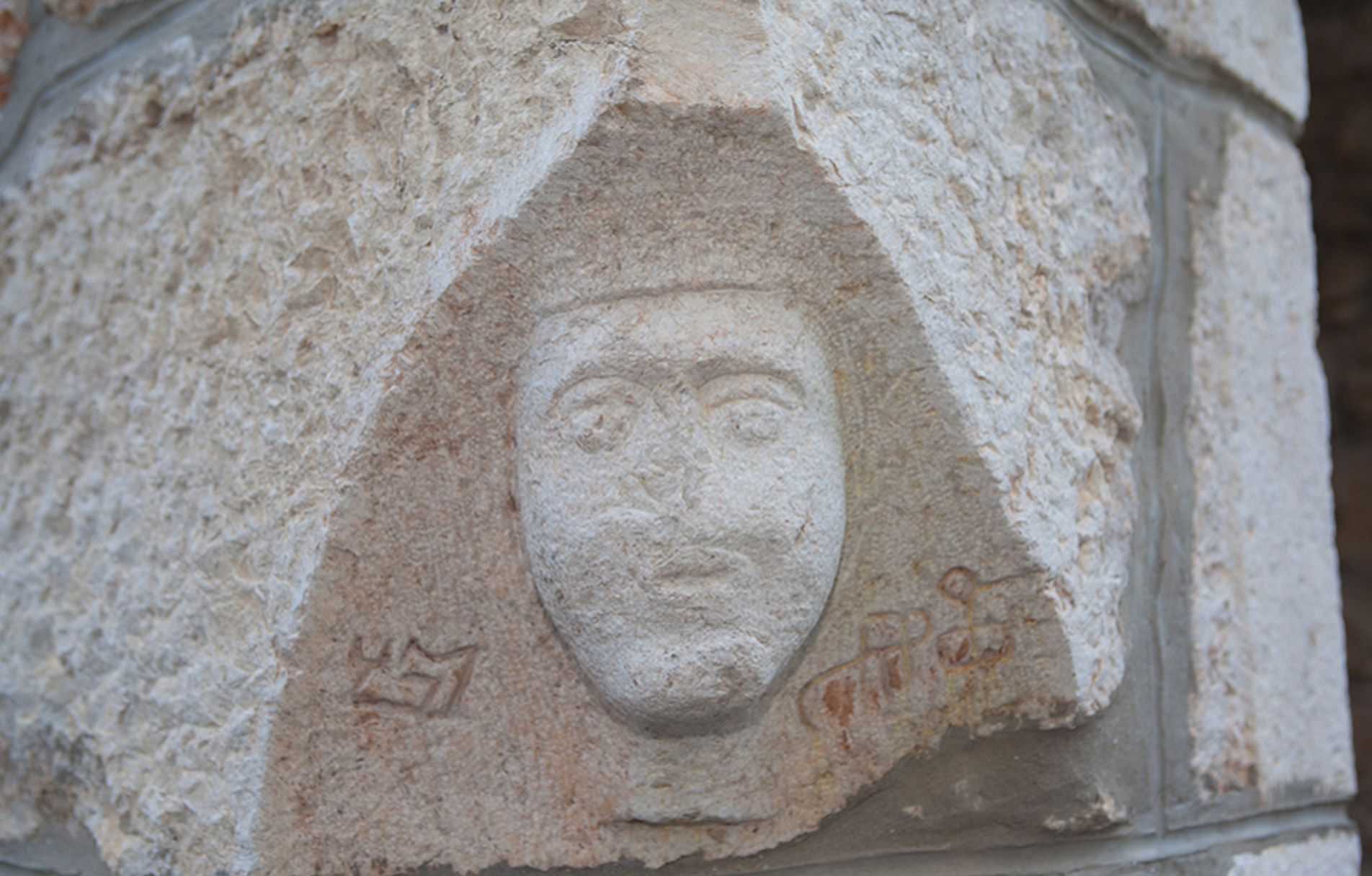 The stone flock of sparrows (locally known as ‘pinkuzići’), which will take you to Jardin, is of a more recent date compared to Maskeron (a man’s head made of stone) found on the opposite side of Placa. It was created in 1738 by the hands and chisel of an anonymous artist. Until today, no one has come even close to finding out who the artist was or what inspired him to create this work. 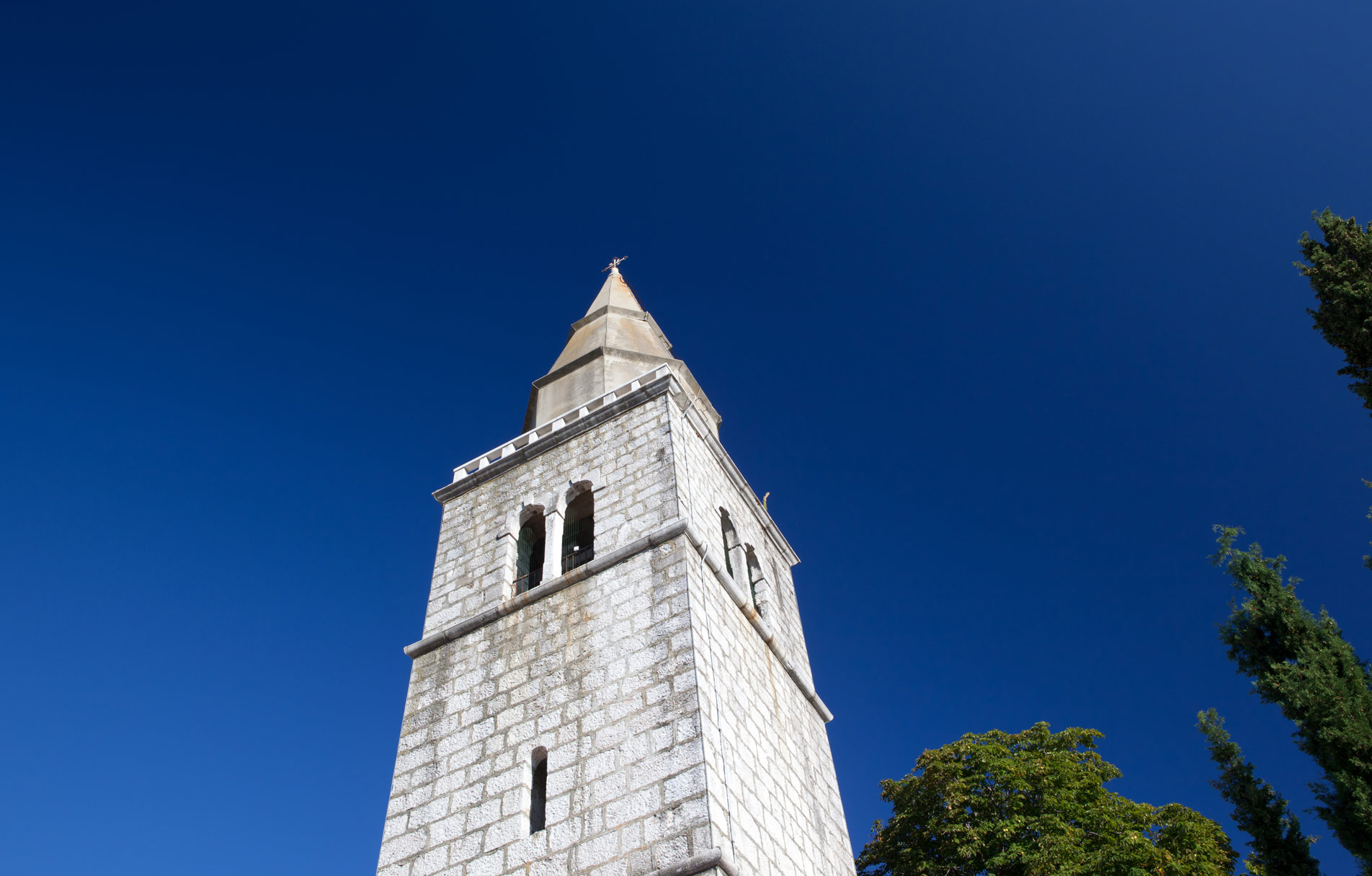 The legend says that when the Dobrinj tower was built, evil tongues put a curse on the future building, saying that it was predestined to be under constant threat of caving in. It was struck by lightning twice, entirely demolished in the Second World War and attacked by the Uskoks once. This proves that the curse put on the bell-tower was active. In addition to being mysterious, almost mystical, the bell-tower of Dobrinj is specific in that it is not located next to the parish church and in that ‘it does not stretch on one terrain only’ (‘niti se prostire na jednom terenu’). One part of it stands at the entrance to Zemjina, a viewing spot, and the other in the park of Dobrinj forever known as Jardin. After enjoying a panoramic view from Zemjina, take a walk along Jardin where Vladimir Nazor, a great Croatian literary writer, and the wonderful, unfortunate woman of Vrbnik, Marija Parčić, used to stroll at the beginning of the 20th century. 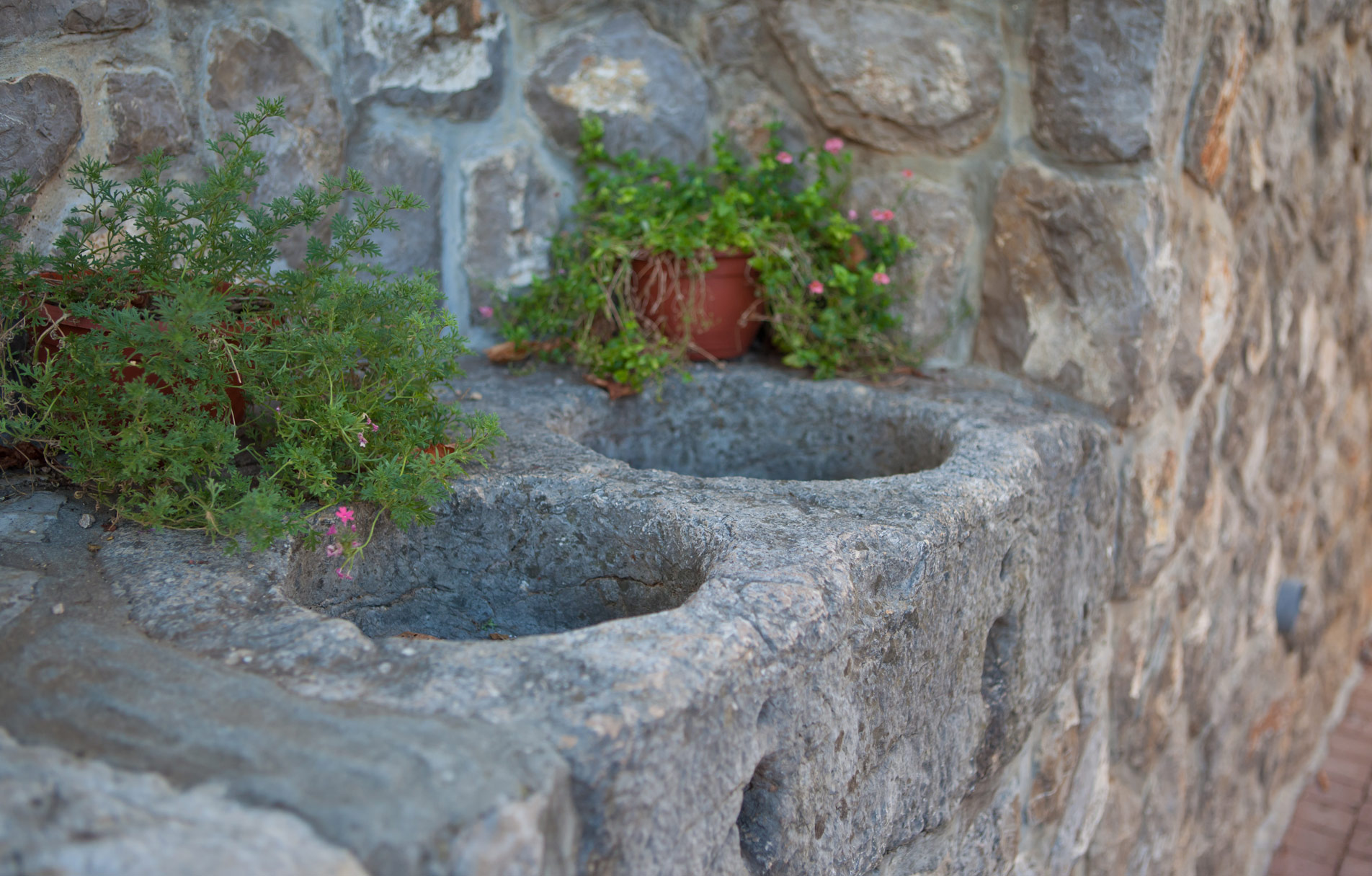 Stone steps lead from Placa to Jardin. Next to the steps, you will surely notice two ‘openings’ and a stone figure that will remind you of a horse. And you are right. It is a horse’s head that is in fact a bearing support for the parts of the building. We do not know whose balcony or ‘balatura’ was decorated by this horse’s head, but the oral legend says that, during the Venetian administration, it used to serve as a measure of length (‘lakat’ or 63.5 cm). The two ‘openings’, as we have previously called them, are in fact traditional measures of wheat and oil, which were used to pay taxes during and after the Venetian administration. 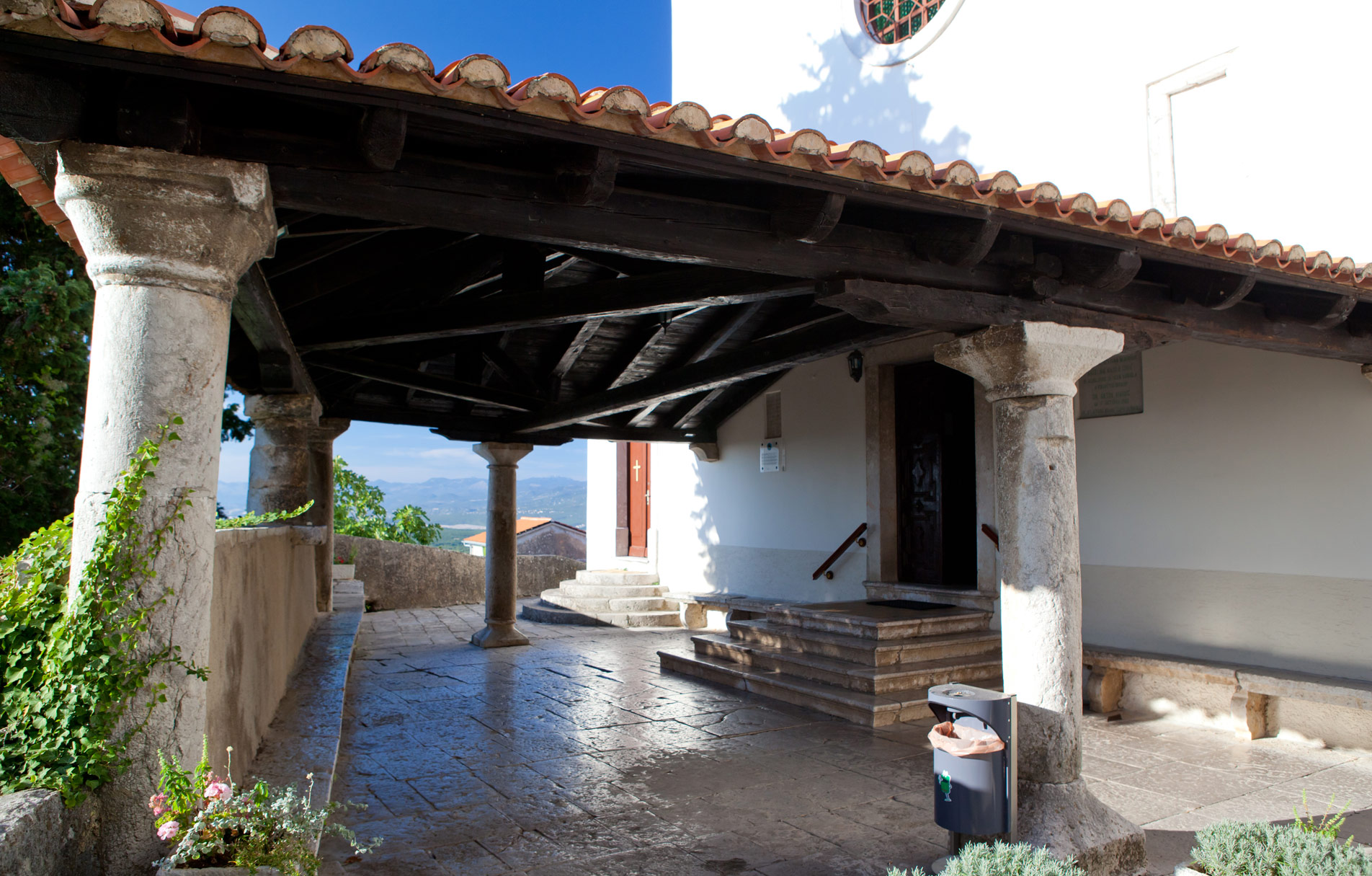 Church of Saint Stephen and “Cergan”

Modern times still do not have an answer to the question: how it happened that the wooden porch in front of the Dobrinj Church of Saint Stephen (Crkva Svetog Stjepana) was built there in that particular shape and bearing that unusual name, cergan. A word possibly from the Turkish or some other language remains an enigma associated to this, yet another in the series of Dobrinj attractions. The three-nave (originally one-nave) Dobrinj Parish Church mentioned already in 1100 is characterised by a combination of the Baroque and Late Gothic styles. Its altar painting called the Coronation of Mary (Krunjenje Majke Božje) was proclaimed a cultural monument. 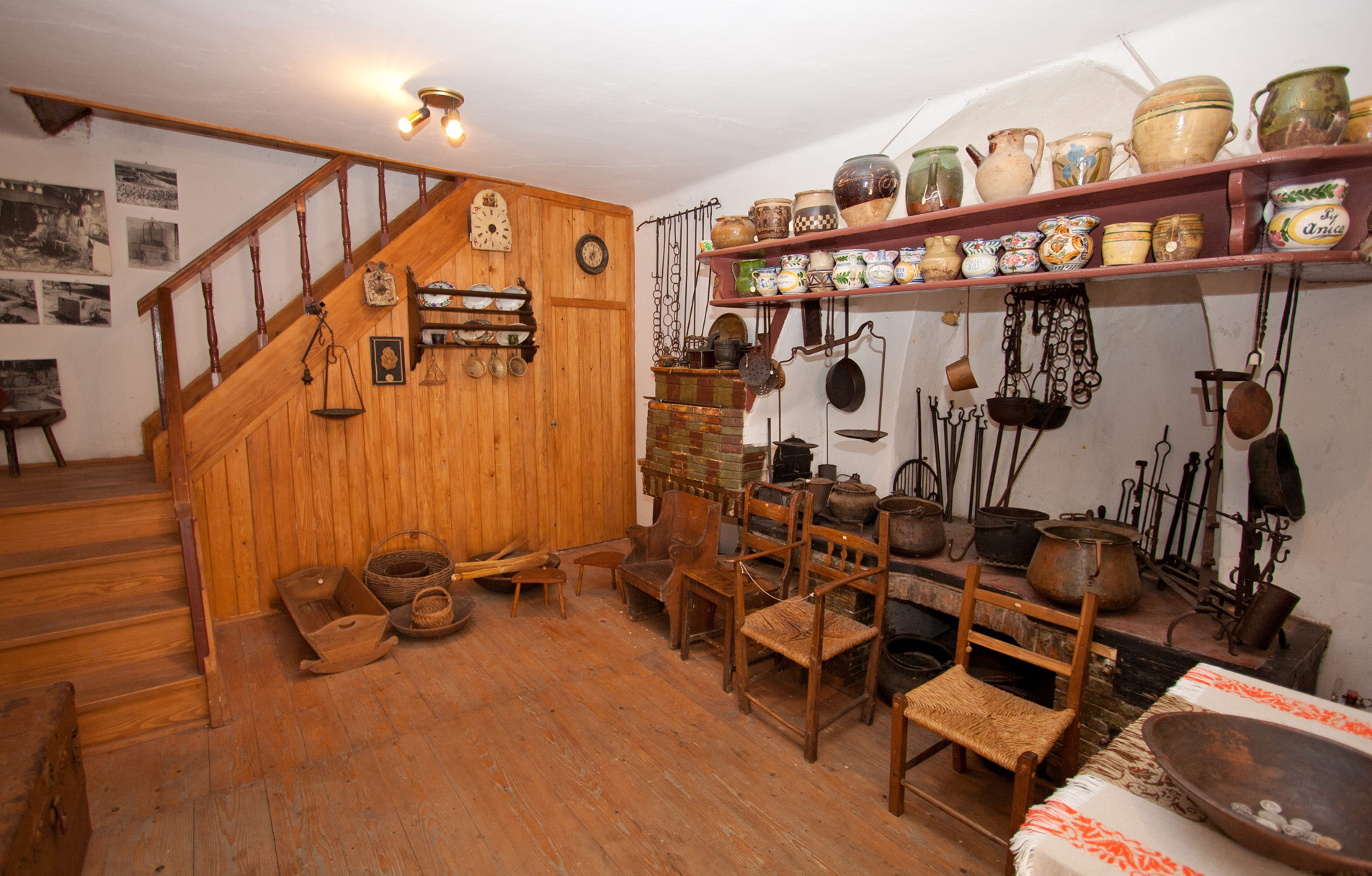 His name is Ivo Sučić. He managed to combine his two great loves, i.e. journalism and teaching. He was so dexterous that he even managed to get an interview with Charles Lindberg, while his knowledge helped him start a Language School in Zagreb. His third great love was Dobrinj, a town to which he bequeathed his birth house. By collecting various objects from across the island of Krk, the people of Dobrinj turned Sučić’s house into one of the largest ethnographic collections in Croatia, into a collection that takes one back into the past, enriches the present and warns of the future. 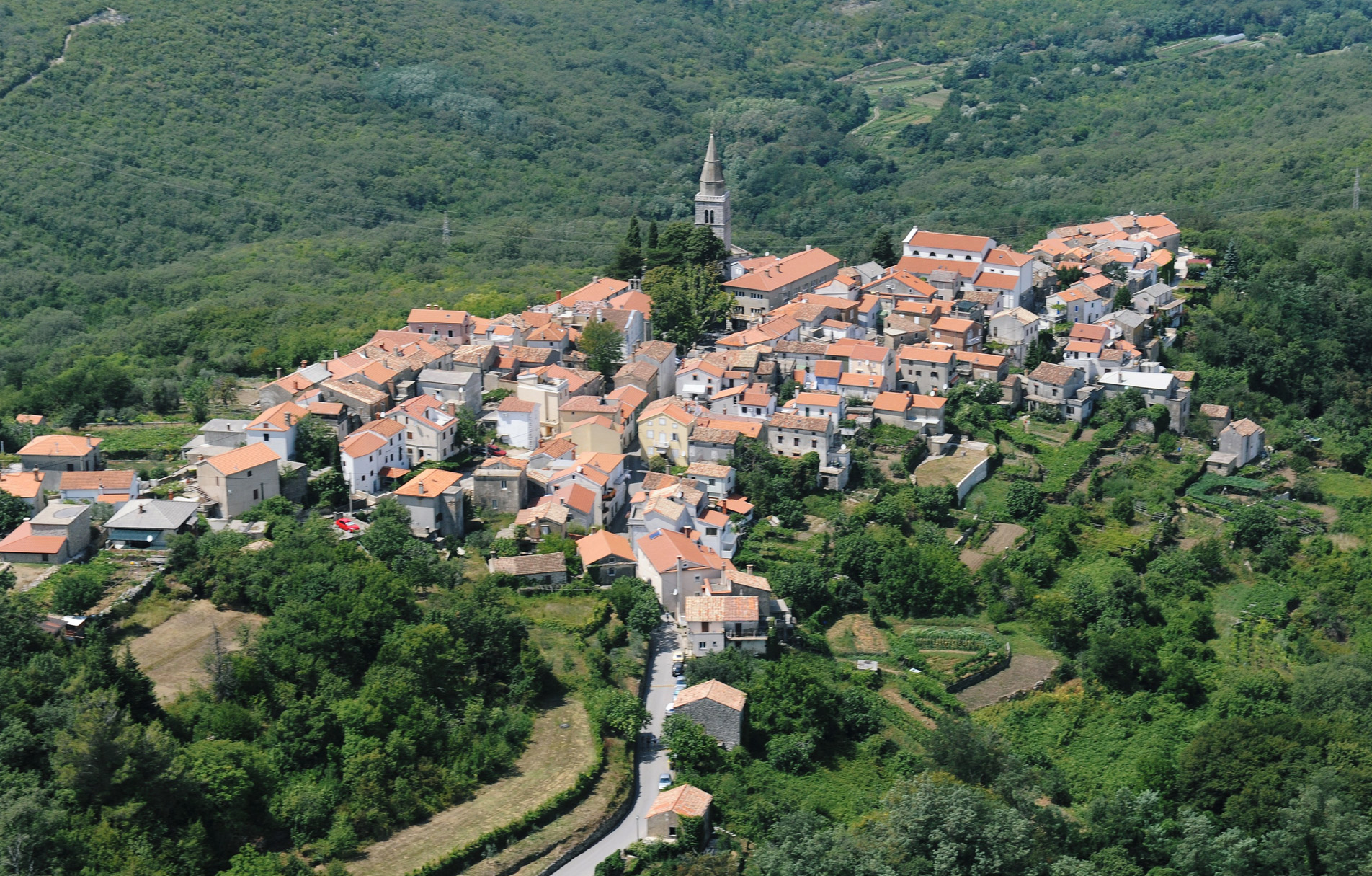 As many as seven churches or chapels existed in the Dobrinj Region in the past centuries. The Ethnographic Collection owned by the Barbalić family is found today at the site of one of them, namely the Church of Saint Laurel (Crkva Svetog Lovre). The tangible evidence of the former life of Dobrinj and the Dobrinj Region together with the stories about the individuals who gave their contributions to the Dobrinj Region have been passed on from one generation to another, from the father onto the son, from the grandfather onto the grandchild. Worth seeing and remembering! 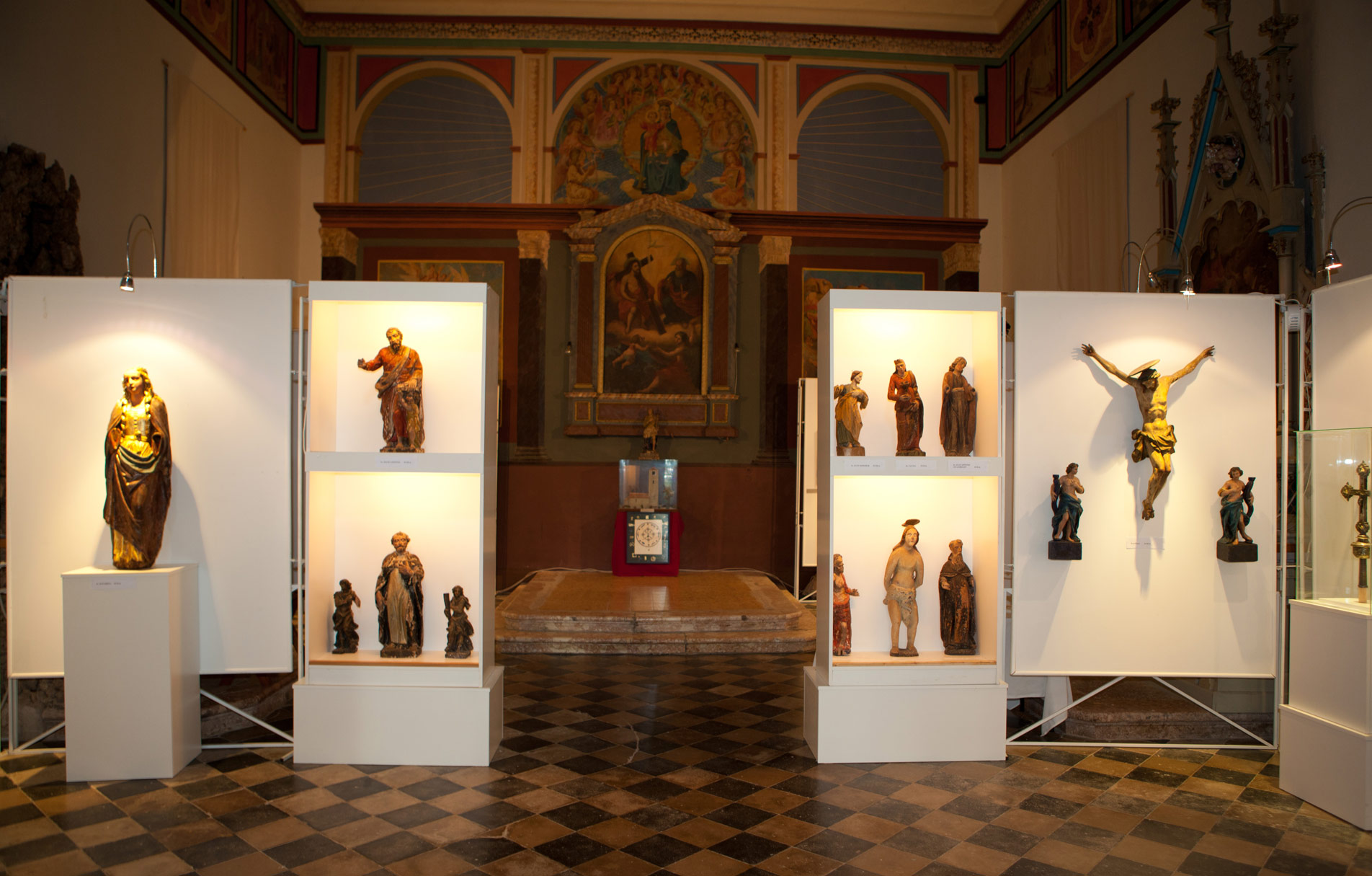 Who/what connects Dobrinj and London? The answer is: Paolo Veneziano, a famous artist. His antependium called the Coronation of Mary (Krunjenje Djevice Marije) dating from the 14th century is a priceless work of art proclaimed a cultural monument and the most significant exhibit of the religious collection housed within the Parish Building. An identical antependium designed by the same artist is found in London’s Victoria and Albert Museum. In addition to the antependium (which was found by coincidence as a doormat in a family home), the Dobrinj Religious Collection also preserves old scripts written in the Glagolitic alphabet, the reliquary of Saint Ursula (Sveta Uršula) and procession crucifixion crosses presenting crucified Jesus on one side and his mother Mary on the other as collection curiosities! 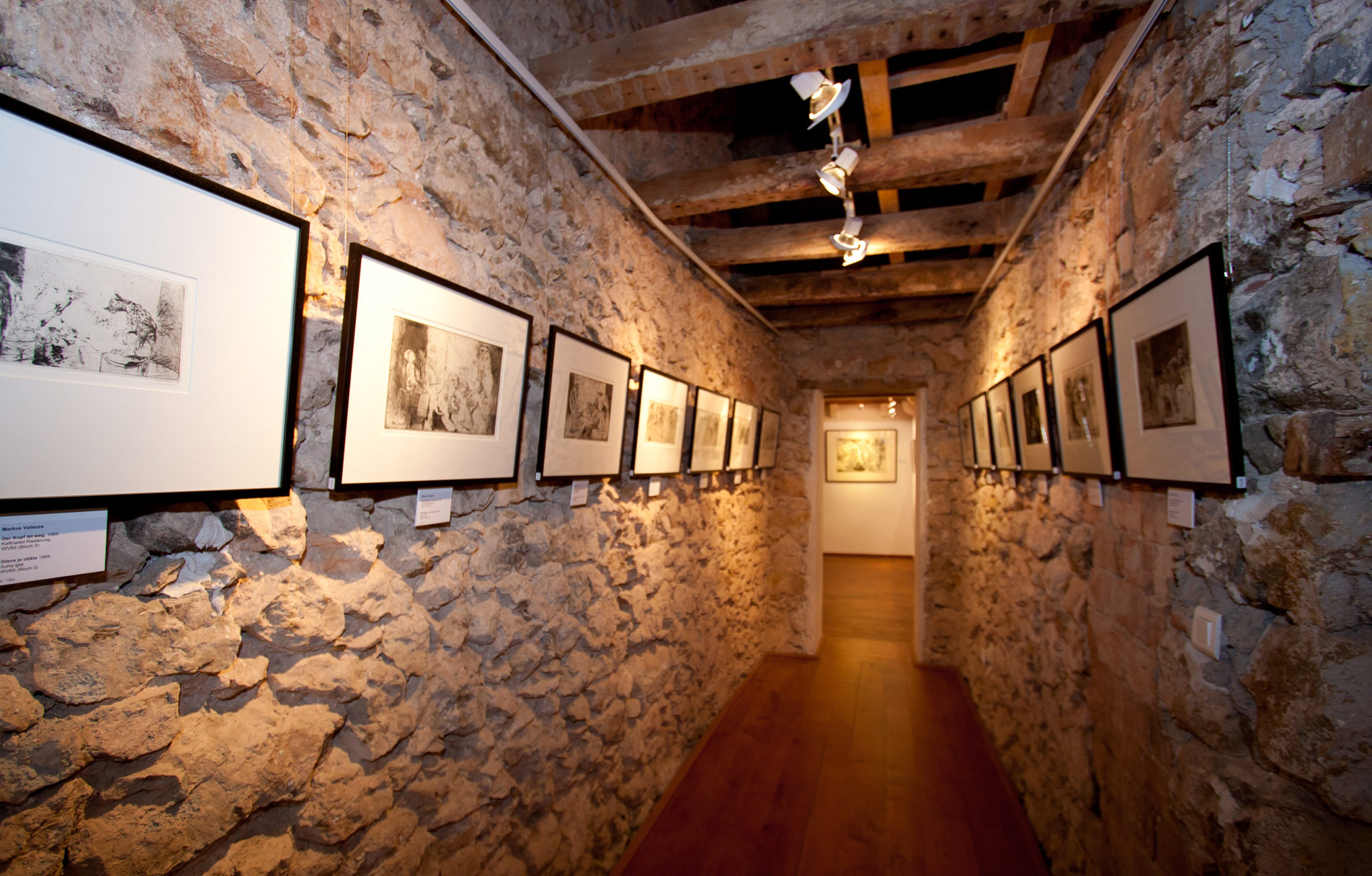 At the beginning of the 20th century, one of the main Dobrinj attractions was the house of sailor Franjo Vušković. From the outside, it attracted attention with the style of construction and the colourfulness of the façade, while from the inside one could hear the sounds which intensified the general impression. Those were the mixed sounds of the gramophone music and the song of a parrot that Franjo Vušković brought from one of his journeys. Ninety years later, one of the greatest world art collectors restored the house’s original exterior and expanded its interior to more than 400 sq m. Thanks to now deceased Peter Infeld, the so-called “Lady of Dobrinj” (“dobrinjska dama”) attracts with its beauty once again, alluring an increasing number of visitors. 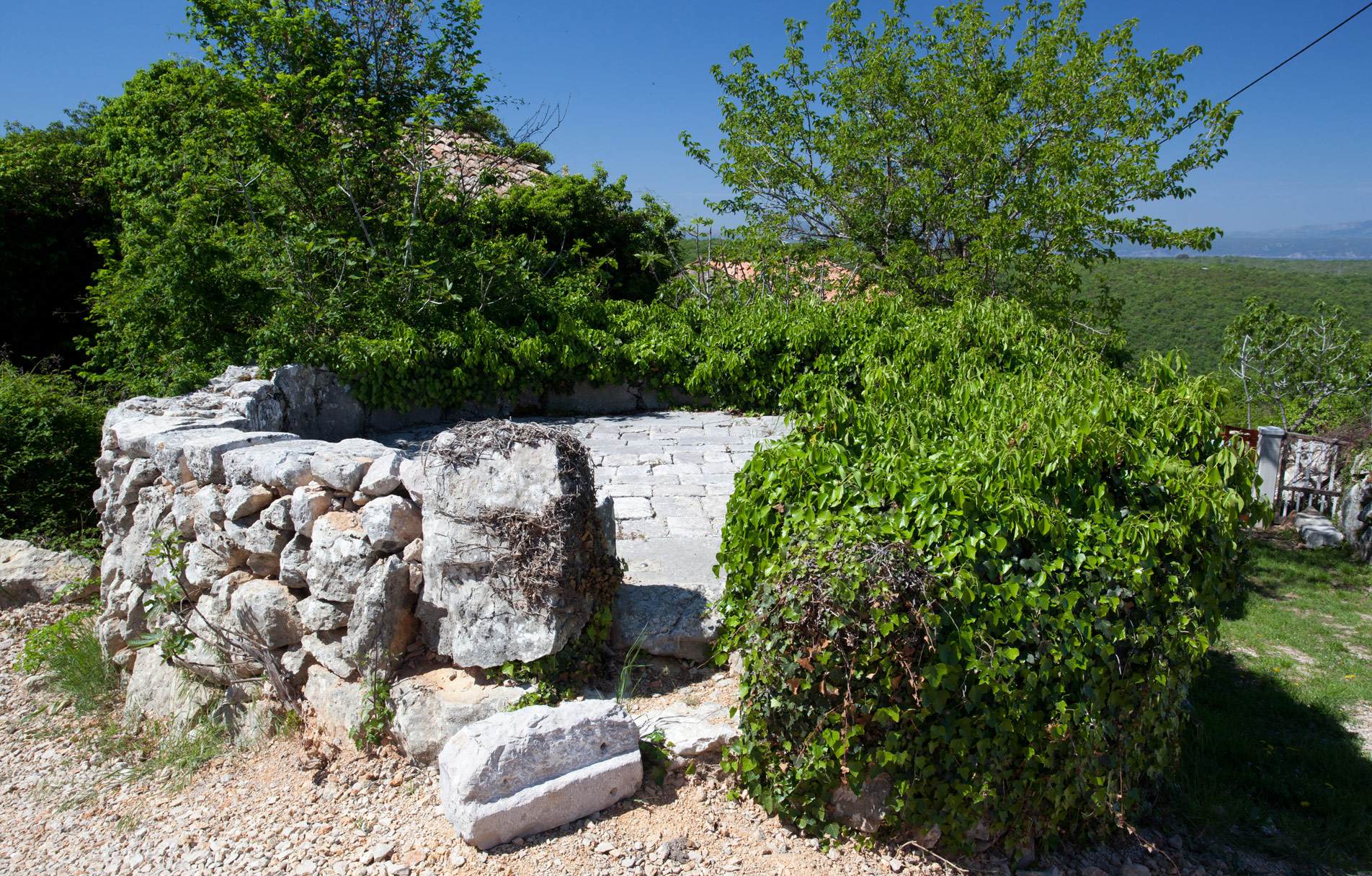 Large, small, covered in bushes or still accessible threshing floors, drywall structures locally known as gumna, are proof enough that it was not said in vain that our ancestors paid each piece of bread with at least one blister on their hands. Gumna were used to thresh grain. Before starting to thresh, the oxen (‘jarom’) were muzzled. Each grain was precious, each one counted. Think of that hard work when you come across a gumno.